Yesterday, September 1st, after so long, maybe too much, I took a break from everything and everyone to go back to doing one of the things I love the most: walking around the city at night.

It was a strange evening, I came out of BnB 83 and the sky was black like the pitch, with clouds full of rain and flashing lights behind the hill of Maddalena. I did not let myself be discouraged and with the scooter I reached in a couple of minutes the center where I stopped for eating at the Mac Bun (I always recommend it to everyone !!). Raw meat with veal calf, then meat with stracciatella cheese, meatballs and chips, a Molecole (a sort of Coca-Cola) and ready for the streets of Turin. 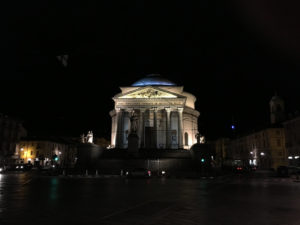 The city was basically deserted, it had already begun to rain and people had reached the restaurants or places chosen for their dinner. I remember a thought that came to my mind as I looked out of the way: it seemed to be in any other European city (maybe north), but not in Turin. Maybe it’s been too long since my last night visit in the city center. Maybe I was too focused on managing the BNB 83 or welcoming customers that I did not realize that the city was slowly changing to something more beautiful, more modern and more European.

The area I’m talking about is Via Lagrange (directly in front of Porta Nuova Station) and some nearby streets. Perhaps the atmosphere was made even more beautiful by the city lights that reflected on the wet roads, I would not know, it seemed almost a winter evening at some point. I was out enjoying the rain (no umbrella for me!) and people inside the rooms illuminated by warm, soft lights talking, eating and having fun.

I walked a lot, I came to Gran Madre along Via Po and Piazza Vittorio Emanuele, noticing how different customers 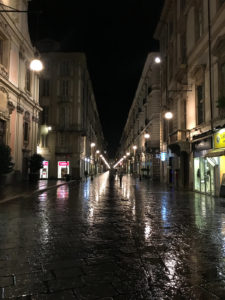 are in the various areas of Turin. More gentlemen in the Lagrange area and definitely younger in  Via Po, Piazza Vittorio Emanuele and Gran Madre, where there are numerous venues that offer aperitifs, cocktails and often a young environment with background music.

Not tired of the walk and with the desire to still enjoy the moment the City was giving me, I returned to Piazza Castello where I gave a coin to a gentleman playing the trumpet under the porches. I was in the center of the square, going to Via Garibaldi but that bitter, sad and melancholy melody caught me and I had to go back to give him an offer because he deserved it all.

I continued for the deserted Via Garibaldi, magnificent by day when it is full of people, but even more beautiful at night when it rains and nobody is walking in. It almost seems to possess it.

Eventually I decided to go home, it was late and my wife was waiting for me. But halfway through Via Roma, inside the San Federico’s Gallery, I’ve found a group of people who love to dance and meet on the evening to dance all together in the city’s square or closed places. 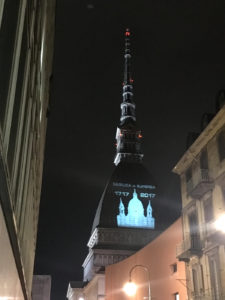 I was almost hypnotized for an hour, saw them dancing, laughing, having fun. They transmitted serenity, passion, emotion, not caring for the amount of people around them who went and came and stopped to look at them, in my opinion even with some envy. I was almost tempted to go dancing with them, but being totally prevented I let myself stay and I limited in watching them without risking bad figures.

In the end I walked through Rome and Piazza San Carlo, I took the scooter and returned home for the first time after so long with a sense of peace that only a city in the rain and at night can give, in this case the magnificent Turin.

I’ll post some photos of the last night’s walk, sorry if the photos are a bit hoarse but it’s the maximum that the phone has managed to do!

We use cookies to ensure that we give you the best experience on our website. If you continue to use this site we will assume that you are happy with it.Ok